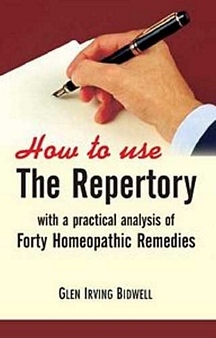 How To Use The Repertory

With introduction of the book given by JT Kent and authored by Glen. I. Bidwell, who was the Member of American Institute of Homoeopathy; New York State Homoeopathic Society; The Society of Homoeopathicians; Monroe County Homoeopathic Society, this work deals with the instructions and ways to master repertory by telling how repertory is our chief instrument of precision. We have to understand that the need of repertory was to narrow down the cumbersome symptoms into rubrics and also to search the medicines in an easier way.  This work is to help the members of our school who are desirous of mastering and using the repertory. It should be used as an index to lighten the task of memory in storing the vast symptomatology of our remedies.

But one should be careful that repertory has led us to the remedy which we believe covers our symptom picture; the selection of this remedy should be confirmed by reading its pathogenesis as given in one of our complete materia medicas. This not only acts as proof of the results obtained in the solving of our problems, but also acts as a check on hurried careless work and at the same time continually increases our knowledge of materia medica.

This book shows how to praise a repertory, its arrangement and how to use it wisely.

The general plan of the repertory work laid down here will help the readers master the arrangement of your favorite work - Boenninghausen's Therapeutic Pocket Book along with the other repertories.

The author discusses Allen's Slip Repertory where care must be taken not to give too high a standing to the nosodes and where the final results will be apt to point to Psorinum or Tuberculinum.

The book is divided into 2 parts-

- First part deals with HOW TO USE THE REPERTORY where most consideration is given to case taking, discussion about miasms, grading of drug symptoms, the selection of the remedy, the administration of the remedy, how to use the repertory, three directions of cure, the three miasms, repertory analysis, dosage and repetition, cases illustrating repertory work form of case record.

Index to arrangement of Kent’s repertory

The Repertory is divided into thirty-seven sections. The two most important sections are found first in the book Mind and the Generalities which are last.

Many of our chronic cases may be worked out from these two sections, from the mentals and the physical general, as when these are found to be covered by one remedy the particulars which have been observed, and many of the common symptoms will be found to fit in perfectly.

- Second part deals with the practical analysis of forty Homeopathic remedies, here forty Homoeopathic Remedies are analyzed using twenty-two rubrics. This tells us to study the medicines in a particular way which we can carry in our minds easily.

Constantine Hering said: “If our school ever gives up the strict inductive method of Hahnemann we are lost and deserve only to be mentioned as a caricature in the history of medicine.”

How To Best Use Boger & Boenninghausen Repertory