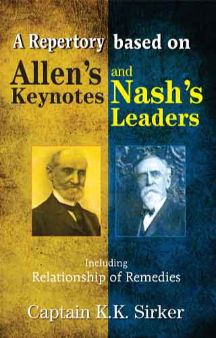 Allen's Keynotes and Nash's Leaders are few of those books which any person who claims to be a homoeopathic student is ought to read. This book "A Repertory based on Allen's Keynotes and Nash's Leaders" is a compilation of the above mentioned books and has been presented in the form of a repertory. It includes a section on the relationship of remedies which makes it easy for the physician to distinguish between the closely related remedies.

The repertory is based on Keynotes and Characteristics with Comparisons by ALLEN H. C. & Leaders in Homoeopathic Therapeutics by E.B NASH.

There are 40 chapters where the chapters are arranged in alphabetical order.

Synonyms are given after the rubric in brackets with the prefix See.

Cross-references are also given after the rubrics in brackets with the prefix- See.

In Rubrics in between medicines modifications are given in brackets

It includes relationship of remedies given in a tabular form. It consists of complementary, follows well, and followed by, antidote, inimical, incompatible, similar & common remedies. Relationship part contains 173 medicines.

? Relationship of remedies in tabular form

? Remedy abbreviations given to avoid confusion.

? Easy to use at the bedside

How To Use The Repertory

How To Best Use Boger & Boenninghausen Repertory