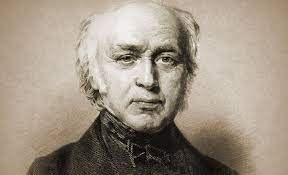 Clemens Maria Franz Baron von Bönninghausen was a lawyer, Dutch and Prussian civil servant, agriculturalist, botanist, physician and pioneer in the field of homeopathy. In 1827 he suffered a derangement of health, which two of the most celebrated physicians obtainable declared this to be purulent tuberculosis. His health continued to decline until the spring of 1828, when all hope of his recovery was given up. At this time he wrote a farewell letter to his close botanical friend, A. Weihe, M. D., who was the first homeopathic physician in the province of Rhineland and Westphalia. Weihe was deeply moved by the news and answered Boenninghausen’s letter immediately. In response to the reply which Boenninghausen sent to this letter, Weihe sent some Pulsatilla which Boenninghausen took according to the directions, following also the course of advice which Weihe gave him regarding hygiene measures. Boenninghausen’s recovery was gradual but constant, so that by the end of the summer he was considered to be cured. This event bred in Boenninghausen a firm belief in the result of homeopathic treatment, and he looked well into the matter. He became thoroughly interested in the principles of the new method of healing. Boenninghausen founded the society for homeopathic physicians in Westphalia, which flourished for many years under the interest which was roused in the Homeopaths whom Boenninghausen drew about him.  He married the adopted daughter of Hahnemann’s widow. He lived with Madame Hahnemann and her daughter, and had access to Hahnemann’s library and manuscripts.