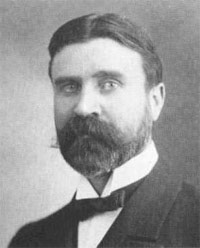 Stuart M. Close (1860-1929) - Dr. Close was born November 24, 1860 and came to study homeopathy after the death of his father in 1879. His mother remarried a homoeopathic physician who turned Close's interests from law to medicine. His stepfather helped him study the Organon and he attended medical school in California for two years. Finishing his studies at New York Homeopathic College he graduated in 1885. Completing his homeopathic education. Close preceptored with B. Fincke and P. P. Wells.Setting up practice in Brooklyn, Dr. Close went on to found the Brooklyn Homoeopathic Union in 1897. This group devoted itself to the study of pure Hahnemannian homeopathy. In 1905 Dr. Close was elected president of the International Hahnemannian Association. He was also the editor of the Department of Homeopathic Philosophy for the Homeopathic Recorder. Dr. Close taught homeopathic philosophy at New York Homeopathic Medical College from 1909-1913. Dr. Close's lectures at New York Homeopathic were first published in the Homeopathic Recorder and later formed the basis for his masterpiece on homeopathic philosophy, The Genius of Homeopathy. The homeopathic library of Dr. Close was reputed to be the one of the best in the country. He was an accomplished musician as well as an avid genealogist. Dr. Close passed away on June 26, 1929 after a full and productive career in homeopathy.

The Genius Of Homoeopathy