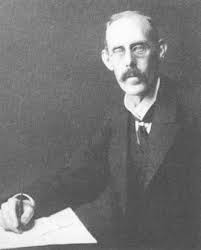 Robert Gibson Miller (1862-1919) was an Englishman born in Kent in 1862, and was educated at Blair Lodge and the University of Glasgow, where he graduated in medicine in 1884. An orthodox doctor who converted to homeopathy, Robert travelled to St. Louis to train with James Tyler Kent and on his return; he founded the Glasgow Homeopathic Hospital. His books and ideas are still very influential today for modern homeopaths He had a big fight to uphold Homoeopathy in Glasgow, but his later years were greatly cheered by the large number of doctors and medical students he was able to convert. His greatest joy was to add another man to the ranks of homoeopathists. Gibson Miller travelled from Scotland to St. Louis and & brought the beginnings of Kentian Homeopathy back to Britain. Gibson Miller was the founder of all Glasgow homeopathy, well disposed towards the laity, lost a son in the Great War [1916] and he died of cancer soon after. Dr. Gibson Miller died of cancer in 1919, having spent his last years working punishing long hours and mourning the loss of his son.

A Synopsis Of Homoeopathic Philosophy

Comparative Value Of Symptoms In The Selection Of The Remedy