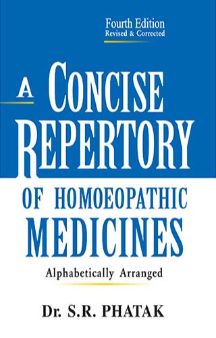 A Concise Repertory Of Homeopathic Medicines

A Concise Repertory Of Homeopathic Medicines

An ideal repertory for the beginners and for those who believe in artistic prescribing. It is an attempt to lessen the difficulties of the prescriber.

Why to use this repertory? • It is the simplest and handy repertory in alphabetical order. Also used as a reference book. ...Read More 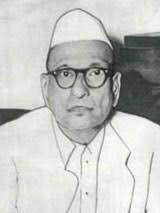 An ideal repertory for the beginners and for those who believe in artistic prescribing. It is an attempt to lessen the difficulties of the prescriber.

Why to use this repertory? • It is the simplest and handy repertory in alphabetical order. Also used as a reference book.
• Students can use for the first case they wish to prescribe for.
• Remedies for a particular rubric are reduced to minimum possible by careful selection which makes the drug selection easier, simpler and efficient.
• Contains pathological entities and rubrics even missed in the Kent’s repertory.
Based on: It is an alphabetized re-working of Boger and Boenninghausen. The repertory is primarily based on the BOGER’S SYNOPTIC KEY and functions on the same philosophy.

PLAN OF CONSTRUCTION - The repertory is printed in 2 columns in each page. All the headings are arranged alphabetically. Repertory begins with Abdomen, affections in general & ends in Zygomae.
- Number of main rubrics is 1971
- Number of medicines- 393
- Unique feature- another feature is the inclusion of Indian food items, thus one can identify with the picture presented by the patient in a more refined manner.

- Dr Phatak has confirmed, tested and clinically proven each and every rubric and remedy before including it to his repertory. Thus the inclusion has either come from his own case experiences and clinical observation or if it has been strongly justified by masters like Kent, Boger or Clarke. Thus it is a time-tested repertory.

- Dr Phatak stressed on giving importance first to the modalities – in that too the causative modalities, followed by the time modalities and later the postural ones. Further, his repertory has followed the concept of ‘generalization’ and thus if you can’t find a symptom at the ‘particular’ level, you can generalize it to find a suitable remedy.

FEATURES: - General modality represented in capitals AGG. or AMEL. And modality related to a particular part is represented by small letters Agg. or Amel.
- Desires and Cravings are two separate rubrics in this repertory.
- Under Desires, we find all mental rubrics.
- Under Craving- rubrics related to food and drinks
- Aversion- both mental and food aversions are given
- Cross references are given wherever necessary in order to find the appropriate rubric. This is given after the word “see’’ in brackets immediately after the remedy.
- Causations are given under aggravations
This repertory cannot take place of exhaustive repertories of Kent, Boenninghausen and others but it is aimed at reducing the burden of the prescriber, in every sense of the word.

About The author- Dr S. R. Phatak, a master prescribe in the field of Homoeopathy, has contributed immensely to the Homoeopathic literature. His literature is enriched with his own accurate clinical observations and experiences.

- A pioneer of Homoeopathy in Maharashtra, Dr Shankar Raghunath Phatak was born on 6th September, 1896.
- He did his MBBS from Grant Medical College, in 1924.
- Started his practice but somehow not satisfied with Allopathic Treatment.
- He was convinced about Homoeopathy while going through Sir William Osler's writings on 'History of Medicine' so switched over to an entirely Homoeopathic Practice in 1932. He also started working on Homoeopathic literature along with his Practice.
- He has contributed immensely to homoeopathic literature. His books are available in 3 languages- English, Hindi and Marathi.
- His book 'Materia Medica' is very popular amongst the students and Practitioners.
His literature is enriched with his own accurate clinical observations and experiences. He was an ardent follower of Dr. Boger. His Repertory is based on Boger's ''A Synoptic key to Materia Medica'.

Dr. S.R. Phatak, a master prescriber in the field of homeopathy, has contributed immensely to the homeopathic literature. His books are available in three languages—English, Hindi and Marathi. His book 'Materia Medica' is very popular both amongst the students and practitioners. His books give us an insight into the philosophy and practice of this remarkable homeopath. His literature is enriched with his own accurate clinical observations and experiences.